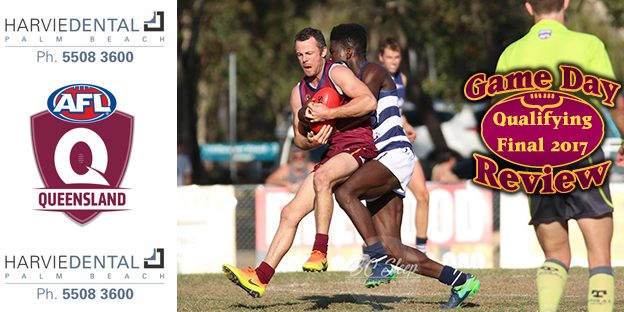 Well what a final! A great crowd gathered at PBC’s Salk Oval for the QAFL Qualifying Final and were treated to a fantastic game as the PBC Lions (2nd) played Broadbeach Cats (3rd) for the right to tackle Labrador in the Second Semi Final.

It was the Cats out of the barriers quickly playing some fast, skillful football in the first quarter.  The Lions were outplayed early and struggled to match the pace of the Cats.  Broadbeach leading at the first break by 21 points.

The slow start for the Lions was nothing out of the ordinary though as this has been a pattern over the last few weeks and they were always going to work themselves back into the game. This proved to be the case in the second quarter as the Lions outscored the Cats by 10 points for the quarter reducing the margin to 13 at the half.

Expectations were high for the Lions to take control of the game but to the Cats credit the game developed into a see sawing battle.  The margin for the Lions was again reduced at 3 quarter time with only 10 points separating the teams.

The last quarter was a heart in mouth affair for the Lions supporters as PBC battled to find the lead.  It took until the last 2 minutes of the game and after a couple of missed attempts the Lions finally got their chance through first year player Jake Burrows, who was awarded a free kick against the point post in the Lions forward line.  With pressure mounting and from the extreme angle young Jake took it all in his stride as he calmly executed a fine snap shot which never looked like missing.  The Lions hitting the lead for the first time in the match off the back of his effort.

The situation then got the better of one of the Broadbeach players, who through a lack of discipline gave away another free kick to Jarryd Douglas in front of goal and then incurred a 50m penalty also to bring him to the goal line.  The resulting goal saw PBC move to an 11 point lead which guaranteed the win.

There was joy for the Lions and their supporters upon the final siren but also a sense of relief, as they had effectively “got out of jail” to pinch an exciting and team lifting win.  The Lions will be looking to build on this momentum as they tackle the Labrador Tigers this coming week for a berth in the 2017 QAFL Grand Final.

Former NT Thunder (NEAFL) Best & Fairest Jake Dignan was outstanding for the Lions, showing his class through the midfield and hitting the scoreboard with 3 valuable goals.  Jarryd Douglas, with 4 goals was also influential with his attack on the ball and leadership. With Sam Davidson, on return from NEAFL duties with the Gold Coast Suns, also amongst the best for PBC and notable contributions from Josh Woolley, Jason Burge, Callum McBurnie and Tom Thynne.

The Lions Reserves after finishing 3rd on the ladder notched up a convincing 66 point win over 2nd placed Mt.Gravatt in their Qualifying Final.  They will now face Morningside in the Second Semi Final.

On Sunday  at Morningside the Lions Colts, after a 4th placed finish on the ladder faced Wilston Grange in the Elimination Final and were too strong on the day for the Gorillas recording a 30 point win.  They will now face Broadbeach in the First Semi Final.

This weekend Seniors and Reserves will play their respective finals at Labrador on Saturday at 2.00pm and 11.30am with the Colts to play Sunday at 9.00am at Broadbeach.

After a slow start to the game where we were second to the ball we put ourselves in a position where we trailed for the majority of the day.

Trailing by 4 goals at quarter time, we were being outplayed. Lack of accountability was the major reason why we found ourselves behind on the scoreboard.

The first quarter would be the only one we lost in the scoreboard as we slowly pegged the margin back each quarter.

The game was played at a lightning quick speed and errors in both sides were punished severely. At 3/4 time the margin was back to 9 points and we knew we just needed to be close and keep the pressure on their young side.

Our intensity and pressure around the ball increased and as a result we forced more errors from them. For the last 7 minutes they only went forward of centre once and we maintained the ball in our half. This proved to be the difference as the pressure we applied caused the Cats lost their nerve and discipline.

Midfielder Jake Dignan, lead the way and showed he is a big game player putting on a second half clinic.

With 2 minutes to go we still trailed but after a free kick to Jake Burrows the young fella calmly went back and slotted a fantastic snap from the tightest of angles. Again Broadbeach lost their discipline and gave away another goal to put the game out of their reach.

Our boys displayed a lot of character and will to get the result. Overall we had more scoring shots and won 3 quarters in the scoreboard.

We now play Labrador with the chance to go straight into the grand final. The boys are super keen and looking forward to the game. Hope to see you all there.

We really turned it on by kicking seven goals to two in the second effectively ending the game as a contest by half time.  We played some of the best footy we have played all year with speed of ball movement from our defensive 50 and and by keeping  an open forward line.

We lost a bit of urgency just after the break but in a great sign our players cranked up their intensity and work rate back to where it was in the first half to kick the last three goals of the quarter to stay well in control.

We finished out strong in the last term to outscore the opposition in all four  quarters. Without doubt this was our best 22 player effort for the year,  each and every player who wore the jumper today contributed in an even team performance.  Attitude and preparation were fantastic and we got the reward that we deserved.  Great signs for our big semi final challenge against Morningside.  Terrific stuff Ressies!

First week of finals and the boys travelled to Morningside ground on Sunday to take on Wilston Grange in an Elimination Final.  Unfortunately, we were missing a few key players in our squad, ‘THE GENERAL’ Jarred Neuhaus (Tendinitis of the patella), Nick Person (Concussion from Rd 18), Hunter Hughes (Flu), Jackson Andrews (Omitted) and Liam Rogers (Omitted).  Arriving at the ground at 8 am I noticed a look in the player’s eyes like they have come ready to play.

First quarter saw us break away to a 20-point lead due to the leadership of Hunter Hall from the centre clearances, along with Liam O’Brien laying some strong tackles.  Lachlan Blackmore had a massive job to do as the only key ruckman all day, which he did.  Changing our structure around for a final isn’t the best things, but having Lachlan Torpy up forward with Ben Stubbs and Jeremy Jago paid off.  Both Stubbs and Torpy both finished with 3 goals for the day.

Second quarter saw Liam O’Brien red carded in the first minute of the quarter, which saw the end of him for the match and us with only 17 players on the field.  The boy dug deep holding off the attacks from Wilston Grange while adding another goal to our score.  Hayden Hoskins, Jimmy Cahill, Matthew Oats, Scanlon Bergman and Dean Katsiris all held the backline together and pushed up forward when we had the ball.  Adding to the back half, Tyson Scheuner showed everyone what a powerful unit he is running the ball from defence all day.

At the half time address the boys were more focussed to put the game well and truly out of reach for Wilston Grange.  Adding another 3 goals to our score to Wilston only 1 goal, saw the margin creep out to 37 points.  An inspirational run and attack on the ball saw Kieran ‘Raging Bull’ Bucknell take off down the wing and kick a goal from 40 metres.

Hunter Hall lead the boys well in the last quarter adding another goal to his tally.  Billy McAllister sealing the game out with a goal taking us to a 30-point win.  To Wilston Grange credit they never stop trying all day.

Congratulation boys on the win.  Now our focus is on Broadbeach next Sunday.