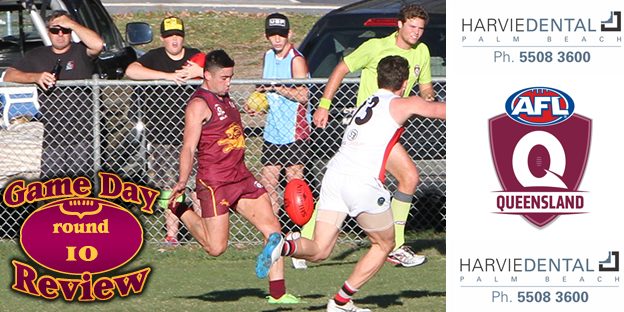 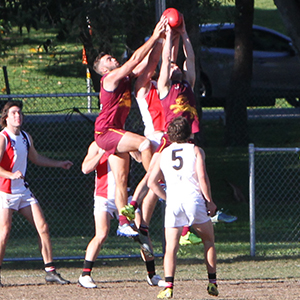 Tyler Cornish marks in front of the pack

Round 10 of QAFL saw the PBC Lions taking on the Morningside Panthers.  With the Lions sitting clear in second spot and the Panthers in 7th position and only 3 wins to this stage of the season, it would be fair to say that this is a game the Lions would have expected to win.

But sometimes what you think should happen is not actually what happens and in this game it was the Panthers who pulled out the surprise win, handing PBC only their second defeat of the season. 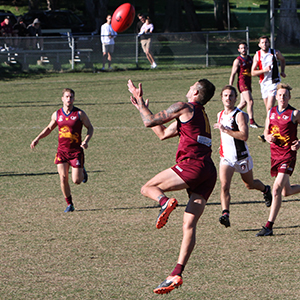 After a tight first quarter. The Lions held the lead most of the game and looked likely to hold on at the 3/4 time break with a 16 point break.  However, Morningside had other ideas and produced a great last quarter effort, kicking 6 straight goals to see them take out the match. PBC had some excuses, missing a number of key players and with only two fit men left on the bench, but ultimately this is a game they should have been able to close out.  The Lions also contributed to the final result with poor accuracy in front of goal, kicking 8.18 for the match.  The old saying is “Poor kicking is poor football” and the Lions will need to get this sorted out as it has been a factor in a number of games. 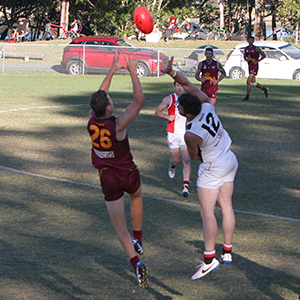 Credit to Morningside though,  they made a lot of their own luck too and obviously played some better footy than they have at stages this year. 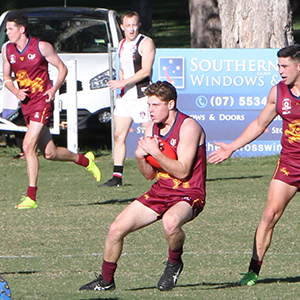 It was a bleak day for the Lions with losses in the Reserves and Colts also.

This week the Lions will need to find something and be up and about as the host the undefeated ladder leaders and reigning premiers Labrador at Salk Oval.  The day will be sponsored by Signtific Signs and the Signtific Cup will be presented to the winning team. 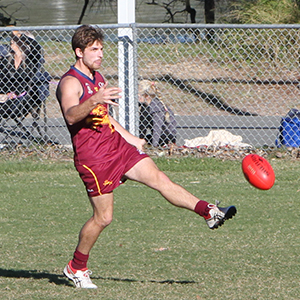 The PBC Backward Raffle is also on this Saturday night 8th of July.

Saturday was not the result that we were after. Initially the boys got off to a good fast start and the signs were looking good but inaccurate kicking cost us dearly.

We were unable to take advantage of some good work up the field and capitalise on the scoreboard and in the end it proved to be our downfall.

The backline again provided plenty of desperation and rebound but our link kicking into the forward line didn’t hit the mark. It’s an area we need to improve on to become more damaging.

Josh Woolley provided a great highlight with a mark of the year contender and Jake Dignan continues to gain form and kicked a great goal from the boundary.

This week we take on Labrador in a 1st vs 2nd game and would be great to see all our loyal supporters there cheering the boys on to victory.

Huge match for our boys against reigning premiers and ladder leaders Morningside.  In what was a gripping,  tough and tight encounter,  we fell just short by six points . With a minute to go scores were level but their experience in stepping up to the big moments saw them score a goal in the last minute to finish with their noses just in front.

All day we payed with great heart and effort as there was never more than a goal separating both sides all day. At times we did allow them to score a bit too easily from the centre clearances,  but our resilience ensured we hit back each time to always be in the contest.

The boys gave everything and despite not winning we take enormous confidence from our efforts against the competitions best side.

Lots of positives from the day including Steve Thynne, Jake Goody and Blake Emblem all getting through their first game of the year from long term injuries.  We also had four boys up from the colts in Liam O’Brien and Jimmy Cahill making their Reserve Grade debuts in addition to second gamers Dean Katsiris and Jeremy Jago. All of these young players acquitted themselves well displaying good moments and signs throughout the game.

Lot to like today, did fall just short but a courageous performance from the ressies.

It was a tough day at the office.

Having three Colts get a run with the Reserves, Dean Katsiris, Jimmy Cahill and Liam O’Brien left us a bit short but once again thanks to  PBC Junior Club helping support us with 6 Under 16 players.  Thank you to the following boys who put up their hand to play Colts Riley Budek,  Angus Pehlan, Cooper Pope, Luke Francis, Fletcher Low and Jake Harrison.

Morningside is an extremely polished, skilful side.  Their run of half back was exceptional, along with their numbers at the contest.  On the other side, we look flat and slow at every contest, determination wasn’t there today to win the ball.  Our only major standout was from Captain Hunter Hall who tried all day laying some great tackles.  Kicking 1 goal for the day will never win you games.  We need to improve in all areas of the game if we are going to take the finals seriously.  Looking to hit the training track hard this week to bounce back on the winners list against Labrador.