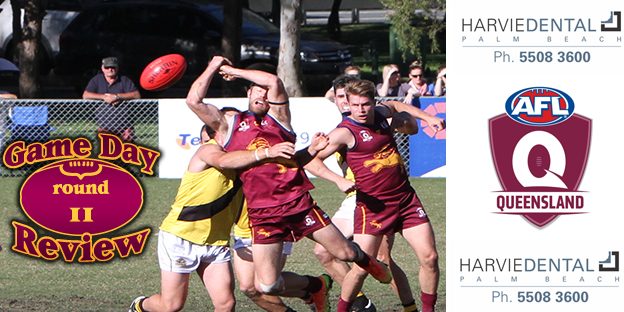 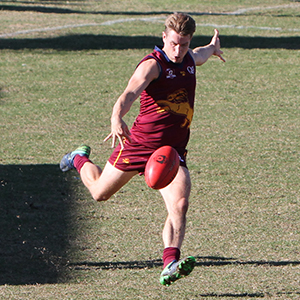 The day started out on track with the Colts securing a close 5 point win and followed by the Reserves with a huge win over Labrador. But unfortunately, an undermanned Lions Senior side weren’t able to secure the hatrick.

With the Lions missing a number of key players, it was always going to be a tough ask against the reigning Premiers, who are undefeated this season.

However, there were some positive signs as the Lions were able to match the Tigers for much of the game.  Only falling away in the last quarter, as the Tigers lifted the intensity.

Ultimately though, the difference was the Lion’s inability to score goals and the Lions can’t wait to get key forward Jarryd Douglas back from injury.

This week the Lions travel up the highway to face Mt.Gravatt for the first time this year and they will need to be at their best to ensure they don’t lose 3 in a row!

After a very promising first half of football we fell away badly in the last quarter. Some outstanding defensive efforts from Liam McNeven and Jackson Emblem in limiting the impact of their opponents and providing many rebounding opportunities. Blake Schneider played a good role and won his battles.

Jayden Verdoorn made a very positive senior debut and showed he can mix it with the quality opposition. Lewis McNally is competing very well against much bigger bodies and holding his own. Some undisciplined acts and bad decision making at times gave the opposition too many soft goals that can deflate a team after a so much hard work up the field. The experienced midfielders Jake Dignan, Jason Burge, Dylan Troutman and Tyler Cornish had a great battle in the midfield but with Labrador’s onballers kicking more goals they just took the points. 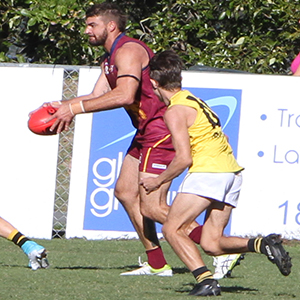 Up forward Lachie Ritchie battled away hard and Jake Burrows is proving to be a handful for opposition defenders. Luke Marshall played a discipline role and used the ball very well. Unfortunately at the moment we just can’t find enough goals to put the opposition under scoreboard pressure.

What we take out of this game is that you can’t afford to lose concentration at all or else it costs you goals and quickly. We will regroup quickly and bounce back for a big game against Mt. Gravatt this Saturday. We need to get back in the winners circle. .

Another big game against our nemesis  Labrador.  Bit of a shoot out in the first 10 mins , after that point we raised our defensive pressure to the level we wanted and got reward on the scoreboard by kicking 3 unanswered goals to take a deserved 18 point lead into quarter time.

The boys then put on a clinic in the second term to kill the game off. We played our best offensive footy for the year, showing great trust in each other and displaying the foot skills that we always knew we were capable of yet continuing to execute great defensive pressure.  We kicked 6 goals and kept Labrador scoreless.

The challenge at half time was to keep the foot down but we strayed from the game plan in the 3rd quarter and dropped our intensity.  Our forward 50 entries became scrappy and ineffective.

Our fall away in intensity, pressure and composure was addressed at the break and it was so pleasing to see the boys get back to the footy that we played in the first half . We showed ruthlessness by kicking 8 goals in the last to record a massive 98 point win. Best team effort for the year and very exciting to know that we still have a lot of upside with this group of players. Well done Ressies!

Last time we faced off against Labrador it was a 1 point victory for us, so we knew that they would come out hard this week to prove a point.

We welcomed Liam Rogers into the team for his first game for the season and Jack McNevin first game back from a hamstring injury, along with two U16 players Coby Williams and Aidan McCabe. Cooper Pope and Angus Phelan also stepped up from the U16 to help us field a side.

First quarter saw Labrador come out fighting hard at every contest, putting scoreboard pressure on us from the first minute of the game. Labrador kicking 4 goals to our 3 saw them go into the break with a 7-point lead.

Second quarter continued down the same path as the first. Labrador getting numbers out the back of the contest and running off their Half Back Line proved too much for us extending the margin at half time to 14 points.

Third quarter saw our skipper Hunter Hall take hold of the game, breaking out of the centre and laying tackles around the ground. While we added 2 more goal for the game Labrador increased their lead by adding 4 goals for the quarter going into the last break with a 26-point lead.

At ¾ quarter time huddle I delivered a message of belief. For the players to believe in themselves as we have proved before we can come back from a 30-point margin and take games. But this would need every player to play their role. Encouragement, Toughness, Strength, Teamwork were four key word that the team would focus on today, and that exactly what happened in the last quarter.

Keeping Labrador to only 1 goal while we added 6 goals saw us run away while the game by 5 points.

Our boys just need to believe in themselves more to take game away from the higher skilful team earlier than leaving everything to the last quarter. Hunter Hall was clearly the best play for us on the day followed by Hunter Hughes, Jared Neuhaus, Tom Woodman, Hayden Hoskins and Jeremy Jago. Our goals came from Riley Engel with 5, Billy McAlister with 3, 2 from Cooper Pope and 1 each from Jeremy Jago, Jack McNevin and Tom Woodman.