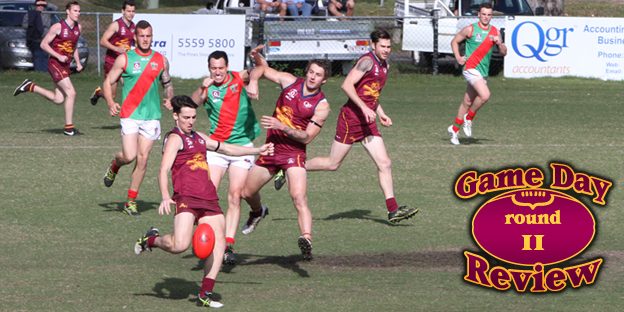 A workman-like 33-point victory over the Sandgate Hawks in Round 11 sees the PBC Lions retaining 5th position on the QAFL Ladder, and with a 2 game break over 6th placed Surfers Paradise, preparing for the second half of the season with aspirations towards final action once again.

The Lions, who suffered an upset  loss earlier in the season to Sandgate, were steeled for battle this week and keen to make amends for their previous effort against the Hawks. Coach Chad Owens really drilled this into the players during the week but it was clear that the players, led by courageous Captain Jesse Derrick, had their sights set on squaring the ledger with the Hawks.

As predicted the Hawks were no easy beats either.  In a high quality match, the Lions fought tooth and nail against the inside grunt of a physical Sandgate side, desperate to get the game played on their terms.

Whilst PBC were never headed on the scoreboard, the match was tight until after half time when the Lions manged to kick clear by 30 points.

The last quarter, was halved between the two sides, with PBC dominant during the early part of the quarter and then Sandgate fighting back late. However, the damage was done and the Lions ran home victors.

For the second  week in a row Josh Woolley was best for the Lions with other standout performances from  teenager Samuel Stubbs (kicking 5 goals), Tyler Cornish, Todd Bryant, Tom Thynne and the ever reliable Jesse Derrick.

In the reserves, the lions hammered home a big 78 point win. Shaun Wilson dominating for the Lions along with Nick Hamilton and Matt Davies.

Both seniors and reserves celebrated their win on Saturday night at the PBC Lions annual Mid Year Cocktail Party.

Momentum is building. We have set ourselves some big goals for the second half of this year. On Saturday we took another step towards that. We have got genuine match winners now on every line and they are starting to play to their ability level.

Saturday, we knew Sandgate would be physical and would run the game out and they did. We had got ourselves in a position to win the game with a solid first half and a very good third quarter. The second half of the match saw the game open right up. We were able to hit the scoreboard heavily but couldn’t quite land a killer blow to see Sandgate off.

Our running game is the best it has been for the season, our defence is solid and more stable and our forwards are now working together. Our young team of Dakota Bannister, Tommy Thynne, Liam Mcneven, Josh Lys, Samuel Stubbs and Tyler Cornish have really hit their straps over the past few weeks and the team is reaping the benefits.

The older wiser heads of Jesse Derrick, Todd Bryant, Josh Woolley, Blake Schneider, Brad Hewat and Jackson Emblem have been able to steady the ship when required and allow these young guys to bring the flair.

As is the case in this competition every game is a danger game. This week will be no different when we play UQ at their ground. Our wheels are now in motion and its time to keep the bus moving forward.