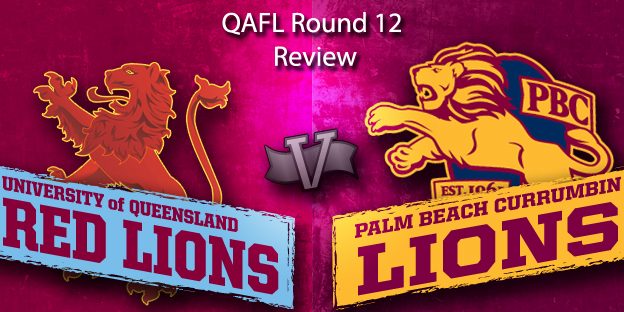 It was the battle of the Lions this week with the Palm Beach Currumbin Lions travelling north to meet the University of Queensland Red Lions head on at St. Lucia Oval

With PBC sitting 5th on the ladder and UQ in last place with only 1 win for the season, it was a chance for PBC to consolidate their 2 game advantage over 6th position and gain valuable percentage.  But you can’t take any games lightly in this competition and the Lions were primed for a big performance.

It was a different experience for PBC, wearing an all-white AFLQ strip instead of their customary maroon due to a clash of colours with UQ.  However, the boys took it all in their stride.

A big 83 point win was set up early with a 7 goal to 1 opening term. PBC maintaining their lead through the 2nd quarter and then piling on the goals in the 3rd before tapering off a little in the last quarter.

Amongst the best were usual suspects Todd Bryant, and Jesse Derrick along with Liam McNeven down back and Sam Stubbs continuing his excellent start to senior football with a 7 goal haul, including 5 in the first quarter.

Our ability to finish off a game was very pleasing from the weekend. The win was set up early, when we played at a frantic speed and were able to put early scoreboard pressure on. Our key players were instrumental in those early stages and everybody went along for the ride.

With the midfield well on top and getting the ball in quickly Sam Stubbs was able to kick 5 first quarter goals. The backline was at its ruthless best and repelled UQ’s forward thrusts with dour defending and relentless running and precision kicking.

It was a day where the things we have been working on went to plan. Having a stable backline over the past few weeks has no doubt been a big reason with our improved form. Versatility through the midfield and the mids then hitting the scoreboard are proving hard for the opposition clubs to stop. The forward line is starting to understand each other’s games better and over the next few weeks we expect that to increase again.

I thought on the day that the majority of our players won their positions and won them well. Todd Bryant continued his great form and accumulated many possessions. Liam McNeven has again proved why we rate him as the premier full back in the competition. Jesse Derrick, Blake Schneider, Tom Thynne, Sam Stubbs and Josh Woolley were again very solid contributors. As he gets more game time from his return Jackson Emblem’s  importance to the team will continue to grow as it did on Saturday.

Again this Saturday another dangerous game confronts us when we take on Mt. Gravatt at Salk Oval. With the bye to follow, our boys will be leaving nothing in the tank to ensure we get the 4 points.

Great win by the boys

Dale Neuhaus continues to shine down back. Nick Hamilton lead from the front again and Danny O’Brien was tough, working in and under the packs.

Great to see big Josh Nelson making a presence down forward. He will only get better with more games under his belt

Thanks to James Hodge for filling in for us.

Tough day at the office again for the Colts.  Undermanned every week and this week we fielded the minimum 14 players with assistance from 1 courageous Southport player we played 15 a side. Southport’s second side (the Magpies) had 17 so therefore they had 2 on the bench to our none.

A slow start in the first half really hurt us on the scoreboard but I asked everyone for a lift at half time and everyone responded.  We got to within 8 points mid way through the last quarter but eventually we tired and Southport’s fresher legs came into play and they kicked away again.

Outstanding efforts from U17’s in Jesse Beame, Kai George (with 5 freaky goals), Lachie Blank, Lachie Blackmore, and Tom Frazer helped us get back into the game along with  lion hearted effort’s from Nick Holloway, and Reece Gallagher.

If we could only put the second half effort out there for the whole game I, I believe we would have won this game and probably a couple of others too.

Well done boys for battling it out. I’m proud of all of you. Thanks to the 17’s boys for helping us out!!