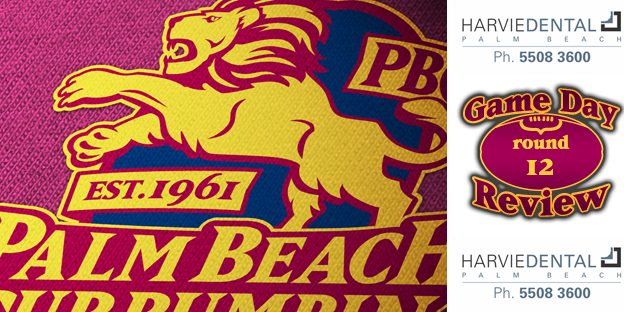 Fantastic result for the Lions this round defeating second placed Morningside for the first time in the QAFL by a whopping 73 points and once again opening up a handy lead at the top of the ladder.

Especially, important was the emphatic manner in which the Lions responded after a couple of flat weeks in which they were average against bottom of the table UQ and lost to Western Magpies at home.

The feeling is great around the club and we can cautiously look forward to being in the finals in a strong position to contend for the flag.  However, the work is far from done and we bang our heads against Surfers Paradise next week.  Surfers have been a little up and down this year but their best footy has seen them put away some pretty handy teams, so the Lions will need to be ready!

The reserves had a disappointing loss but remain well in the race for finals action in 3rd position equal with Surfers Paradise, their upcoming opponent, so this weeks match is a big one as far as the ladder goes in the Reserves competition.

The Colts have improved their ranking and now sit in 8th in the 19 team competition. There is an opportunity to play in the finals if they can continue their good run.

What the coaches had to say..

Effort and attitude were the key ingredients to Saturday’s great victory. It was a very even performance from the whole team and the workload was spread across the entire team. We could see from the first bounce that we were up for the challenge today and that we were going to be the team that dictated the style of play.

The game is won and lost in the middle and in there we were super. Lead by the skipper Jesse Derrick, Flinn Chisolm, Daniel Grant and Nick Crowley in the ruck. Off the wings we were using the space well with Jed Harrison and Zac Callinan.

With the ball coming in regularly our forwards were able to work well for each other and provide plenty of scoring opportunities. Big Jon Croad and Jarryd Douglas were giving great targets up forward and Sam Stubbs was working well and flying at his marks.

Down back the discipline was outstanding and the want to help each other and outnumber at the contest was the best it’s been all year. Jackson Emblem and Liam McNeven were all over their opponents in Kent Abey and Alexander Mitchell and controlled the speed of the game.

Josh Lys, Matt Derrick, Josh Woolley, Callum McBurnie and Zac Harrison provided plenty on contests and run from the back half.

All in all, as already mentioned, it was a solid team effort and great reward for effort. We move on now to Surfers a Paradise next Sunday at their ground. It would be great to see all our supporters there cheering the boys on

A really, really disappointing day and performance unfortunately from our boys today. We have been terrific all year but today’s effort was unacceptable.

Great emphasis pre game was placed on various areas yet we displayed an inability and refusal to carry out what was required. Right from the start we were unable to restrict their ball movement and as a result placed no pressure on their ball movement.  6 goals to 1 at quarter time and we were always playing catch up from there.

The boys did show greater effort in the second half but the damage had been. Nick Hamilton, Sean Brookes and Tom Frazer all battled well.

We now slip to 3rd and come up against an in form Surfers next week who are in 4th but now join us on the same amount of wins. A positive response is needed and expected.

The boys had a solid win on Saturday and we are building!

We had Hunter Hall and Lachy Torpy come up from 17s and both showed experience beyond their years with Hunter amongst our best.

Tristan Evert has continued on with another best on ground performance.

Lachy Fog was solid and used his size well in the contest and was great for us also along with Dan Stubbs, James Elliot and Jesse Beame.

We did have a lapse of focus for about 6 minutes in the second quarter which we fought back to gain momentum in the 3rd and 4th.

Our goal kicking is improving and our physicality is on the up. We just need to be more focussed and committed to team rules for 4 quarters and staying in the moment for an entire game which starts on the track. If everyone is giving 100% every time we train and play its only then that we can grow in confidence as a team.