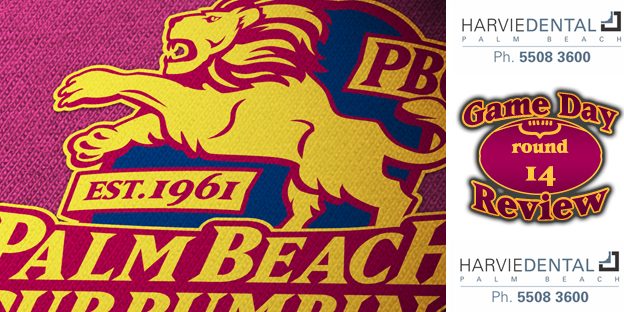 It was crucial for the Lions to back up their win the previous week and ensure that they start to build momentum towards the end of the season.  Whilst the Lions would start favorites against the Gorillas, there is no easy games in the QAFL and if you’re not playing your best footy each week you win be on the losing end quite often.

The Lions got the job done and wins to the Reserves and Colts also capped of the day.

“Fresh to the Lions lineup, Bradley McDonald capitalized on their midfield dominance and bagged six, getting out on the lead and giving the Gorillas defenders headaches.

Burge and particularly Cornish were in full flight against the undermanned and young Wilston Grange, but the contribution from young gun Zac Harrison was just as influential in the 148 to 63 victory.

Harrison shapes as an important contributor in the build up to the finals; if he can continue to be that extra ball winning midfielder for the Lions, they’ll have more tricks when Derrick, Burge or Cornish can’t get to the contest.”

A good first quarter was going to be crucial and we got off to a great start. Coming up against an undermanned side early scoreboard pressure was what we were chasing to put the opposition on the back foot.

The midfield were working hard and giving the forwards plenty of opportunities to score. Early on we didn’t take our chances with 5-6-36 not really telling the game dominance we had. The forwards pressure for the second week in a row was really high and it makes a big difference. They were busy and gave multiple options and caused panic in the oppositions defence with chase down tackles.

The backline again gave plenty of rebound and used the width of the ground really well with switching and link running that provided a platform for the midfield to work off. Winning their one on one contests was really pleasing and the poise with the ball was really good.

The midfield again whilst up against bigger bodies were able grind away and then get on top of their opponents. The midfield depth has been tested this year and yesterday they worked well together and outworked and outclassed the opposition.

With only 3 home and away games remaining we are starting to build some momentum again playing with more confidence and enjoyment. This week we travel to Western Magpies to take on another finals aspirant. It will be a tough game heading into the bye.

Another gutsy and courageous win against quality opposition from the reserve grade team today. The game was a real arm wrestle early on with their tall key position players causing problems.

We turned up the heat in the second quarter to get the game on our terms to have a 3 goal break at half time.  Unfortunately as is the trend of late, we lost both Matt Peck and Blake Schneider by the break with knee injuries.  We also then lost Mark “Ticket” Mcgill early in the third with concussion so our rotations were stretched for the majority of the second half. The boys dug in and really ramped up our defensive pressure at the contest.  We stretched the lead by kicking the only 2 goals of the quarter,  one a brilliant running goal from impressive debutant Hunter Hall and the other through  a great crumbing effort by our ruckman big Blake Emblem.

With the boys out on their feet we withstood the inevitable Wilston charge by showing great grit and resolve. It wasn’t pretty but to hold on under real duress and to come away with a crucial 15 point win has set the season up with the double chance now ours for the taking.

Another special effort from this group,  well done to all.

With the finals a month away, our competition is really heating up.  Coming into this round Morningside was on top of the Ladder with 4 other teams on equal points , Wilston Grange was one of those team fighting with us for that 2nd spot.  We knew that this week’s game was going to be a hard fought out battle.

Having Dean Katsiris and Hunter Hall called up to the Reserves along with Tyson Schuener, Hunter Hughes, Liam O’Brien, Nick Peron, Ioan Jones, Jeht Wollington, Logan Schlager and Ryan Suddes all out due to injury and or sickness, we had to call up a few Under 16 once again to fill aside.  Harry Day, Luke Francis, Cooper Pope and Riley Budek all stepped up to the plate and played well for us.  With all our injuries, this year we have given 12 Under 16 players the taste of Colts football, hence great development for next year.

First quarter saw both teams keen to get off to a good start.  The pressure around the ball was intense.  Palmy kicked out to a 2-goal lead from Riley Engels while Wilston Grange could only manage 2 points.  At the quarter tine huddle I encouraged the plays to stick to our game plan.  Great 1st quarter from our backline lead well by Hayden Hoskins, Matthew Oats and Arron Ashby gave great drive from the tap work of Jared Neuhaus.

Second quarter both team added 2 more goal to their score.  Both of our came from Riley Engels again, taking him to 4 goals for the half.  Hayden Hoskins put in another great quarter, marking everything that came his way and switching the ball from defence.  Along with Jeremy Jago down back they spot several opportunities for Wilston Grange.  Ben Stubbs and Jared Neuhaus were both getting under the Wilston Grange skin were on the receiving end of a few uncalled for hits on them behind play.  Billy McAlister used his fitness to move all around the ground tackling and applying pressure at the contest.  Going into the half time break 14 points up we knew that Wilston Grange would come out hard at us in the third quarter.

That’s exactly what Wilston Grange did, limiting us to only 1 goal for the quarter by Billy McAlister.

Jordan Burns and Jimmy Cahill helped stop the onslaught from Wilston Grange.  Kieren Bucknell, Cooper Pope and Harry Day all fought hard as Wilston kicked 2 goals 7 points to close the gap to only 2 points at the end of the quarter.

We knew that we had to settle the boys down and get back to our style of football heading into the last quarter.  Wilston Grange still had something to prove after we ran away with the victory from earlier in the season. Aaron Ashby with the opening goal gave us the drive to apply pressure for the next 20 minutes.  Wilston Grange gave us everything they had but when Billy McAlister kicked his second for the day, they knew it was all over.  Running away with a 6-point victory took us to 3rd position on the ladder but equal points with 1st.

Great win boys.  It just proves that all the hard dedicated training we do during the week pays off in the final moments of a game.