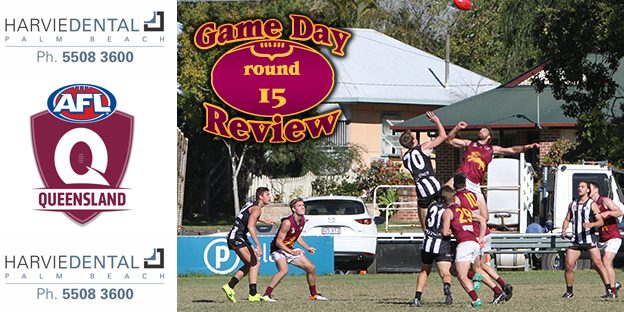 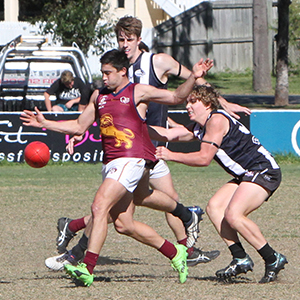 Getting to the pointy end of the season now and with the Lions sitting clear in second place by a couple of games, a home final beckons.

Heading up the highway to Western Magpies has been a tough journey over the past few years but the wheels have turned at Sherwood and it was  a younger and much different side which would greet the Lions this week. Having said that though, the Magpies were coming off a 65 point win over Surfer’s Paradise in Round 14.

The Lions are slowly returning to their early season form with a number of senior faces returning to the line up over the past few weeks.  None more welcome than prolific forward Jarryd Douglas, who has been seriously missed since injuring himself in Round 8. 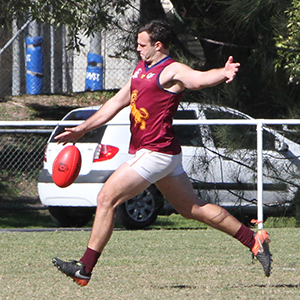 The main stays of the PBC midfield in Jason Burge and Tyler Cornish ran riot through the middle and the Magpies had no answers to contain them, whilst Captain Jesse Derrick was back on song after a quieter than usual game last week.

The forward line woes of previous weeks were forgotten as the Lions found multiple avenue’s to goal for the first time in a while.  Tom Thynne and John Macansh booting 4 each and Lachie Ritchie with 3 also. 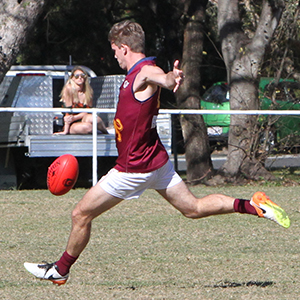 It was mostly one way traffic throughout the game and in the end the Lions ran away with a huge 103 point win.  The reserves also went big with a 93 point win whilst the Colts, battling injuries and severely undermanned lost by 30 points. The Reserves and Colts currently 3rd and 5th on their respective ladders.

PBC have the bye this week and no doubt the players will make the most of the timely break.  After this 2 more games for the season, Mt.Gravatt at home and then Sandgate away to wrap up the regular season, and then onto finals. Hopefully, with all three grades involved!

Over the last 3 weeks we have slowly been gathering momentum and playing the game to a standard that we believe we are capable of. On Saturday we took that momentum a little further and played our best 4 quarter effort for some time. The players got off to a fast start and at ¼ time had opened up a 4 goal advantage. The midfield was on top and the backline was tight and spoiling well. The forwards capitalised well from the up field play.

The accountability was of the group was very pleasing and by ½ time the margin was out to 10 goals. The message was clear that we had to remain discipline and finish off a team like good teams should. The boys did do that and more. They completely outworked and outplayed the opposition and by ¾ time the lead was out to about 14 goals.

Each line continued to work hard and focus on beating their man for the team. The return of Jarryd Douglas up forward was very welcome and he was prominent with 6 goals, giving the team a direction to kick to.

Overall it was a very pleasing game and now the boys will take a well-earned break after a tough stretch. After the bye we take on Mt. Gravatt for what is our last home and away game at Salk Oval. Hopefully we can get a big crowd there and turn the tables from last time we met.

Another comprehensive win and impressive four quarter display by our boys.

We took control of the game early and played it on our terms right to the end.  We set the game up with our commitment at the contest which gave us first use of the footy.  Good movement on the outside and from behind the footy ensured our forwards had plenty of opportunities to put scoreboard pressure on the opposition.

Great to see us with an even spread of goalkickers and also to be consistent across all quarters, kicking five, five, four and five goals across each quarter.

Also really pleasing to see the effort and performance of our three colts players who played up in Hunter Hall,  Jim Cahill and Dean Katsiris. Well done lads.

We get a well deserved break this weekend,  the boys are very tired and sore but have represented their club brilliantly over the last eight rounds since our last break .

Well done all, enjoy the rest .

With an opportunity to take outright second position on the ladder the boys headed up the highway to face off again Western Magpies.  Once again due to injuries in all three teams we had to call upon 4 Under 16 players to take on a team fighting hard for the same position as us.  A massive thank you to Angus Phelan, Harry Day, Howard Bronson and Luke Francis for their dedication not only to U16 Div 1 team but also to our Colts team.

With Dean Katsiris, Jimmy Cahill and Hunter Hall all being called up to play with the Reserves we knew it was going to take our best to get the points from the Magpies.  Unfortunately, our boys didn’t come to play and the Magpies took the win.  Time to reset over the bye and address a few areas that we fall short on.