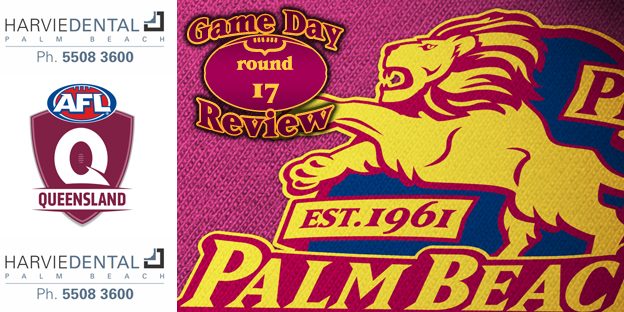 The Lions hosted the Vultures at home and were looking to wrap up a home final with a win over Mt.Gravatt who had beaten them only a few weeks earlier at their ground.  Through an usual quirk in the 2017 fixturing the two teams would meet again within a few weeks of their first encounter for 2017.

The Vultures were the ones out of the gates early and you could have been forgiven for thinking they were capable of running away with the game midway through the first quarter when they lead 6 goals to 2.  The Lions looked anything but the second placed team at that stage and the Vultures had everything going their way.

However, the Lions worked hard to turn the game and after a tight and low scoring second quarter they went to the main break with a manageable 10 point deficit. It was quite windy on the day and some of the field skills were astray but the goal kicking from both sides a was unusually accurate early.

The main break appeared to do the trick for the Lions and they came out roaring in the second half, blasting 7 goals to nil in the third quarter and repeating the dose with a further 6 goals to nil in the last quarter. The Vultures had no answers once the Lions were wound up and the final margin was 56 points in favour of the home side.

Jarryd Douglas again showed his value to the PBC line up with 5 goals, and along with the ever dangerous Brad McDonald led the way in the forward line. Jason Burge and Tyler Cornish were strong through the midfield particularly so after half time and Liam McNeven put in another great performance in the backline and Josh Woolley was prominent in second half.  The bulk of the Lions team were solid in the second half and they showed why they are the favoured challenger to the undefeated league leaders in Labrador.

The reserves and colts also scored solid wins on the day and are now well placed for some serious finals action also.

The final game of the home and away season sees the Lions taking the longest road trip in the competition to face Sandgate this weekend.

The boys were focused before the game, with the lure of locking up a home final if we could secure the 4 points. But coming off a bye we got off to a slow start and took a while to settle into the game.

The first half was a shoot out with both teams playing Russian roulette and defence was not at its strongest. A strong first half performance from Brad McDonald was enough to keep us in the hunt at half time and trailing by 10 points.

The start of the third saw a big shift in the game. The defensive side of our game improved and quicker ball movement saw the ball come in quicker and put their defence under attack. In 5 minutes the game was back in our control as we slammed on goals. The midfield worked hard both ways and the backs starting to pay more respect to their opponent and the forwards capitalised on the hard work been done further up the field.

The second half was emphatic and the boys ran away with the game kicking 13 goals whilst holding Mt Gravatt goalless.

It was the exact response we were after and a good sign of hanging tough whilst not playing our best footy.

This Saturday we travel to Sandgate for the final home and away game of the year. Be great to see our loyal supporters up there.

We welcomed ladder leaders Mt Gravatt for our last home game of the year  knowing we were in for a major tussle. Pre-match focus was centered around applying extreme physical pressure and we carried out our objective perfectly in the first quarter to kick 4 goals to 1 despite going into the wind.

We added another 2 with the wind whilst keeping them scoreless to set up a comfortable 5 goal lead at half time.

We finished them off in the 3rd with great run and carry as well as continued defensive pressure at the opposition.  The forwards and mids were excellent in keeping the footy in our half thus allowing our backs extra time  to set up.  Our pressure was too much for Mt Gravatt which in the end saw us record a well deserved 44 point victory.

Today we displayed the type of defence and pressure that creates September success,  it was our best team performance for the year which is a great sign with finals nearing.  Great effort by the Ressies,  well done all!