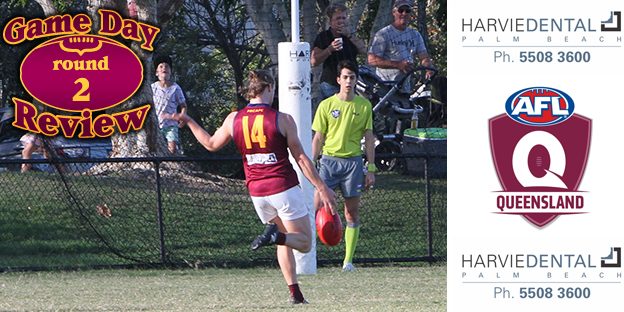 Heading to Labrador to take on the reigning premiers was always going to be a good test for our Lions.  A vastly different side to our Grand Final side of 2016 but going up against the best in the competition over the past few years.

Labarador would face up without a couple of key players, notably Captain Bryce Retzlaff and the Lions still have a few of the best 22 on the sidelines including Stephen Thynne, Brock Askey, Zac Callinan and recruit former Southport Captain Ben Headland.

There were 3 changes to last weeks team with Antony Sercombe (family comittments), Curtis Marsden (GC Suns NEAFL) and Taylor Homsbch (GC Academy) all unavailable. Blake Schneider and Jackson Collins made their way into the senior team along with Patrick Connelly, who made his senior debut.  Well done Patty!!

From the first bounce it was a very fierce contest. There was plenty of ooh and ahhs in the crowd as players from both sides cracked into the contest, neither side was taking a backward step.

For the second week in a row, the wind was strong and mostly across the ground and there was plenty of loose ball and lots of contests.  Whilst it never looked likely to be a high skill, high scoring affair, it certainly was a quality spectacle from the sidelines.

The Lions acquitted themselves very well and appeared to control the early part of the game getting out to 3 goal lead at one stage which looked substantial in the blustery conditions.  However, a lapse in concentration late in the second quarter saw the Tigers bang on a few quick goals and all of a sudden we were a goal down at half time.

After half time, the Lions struggled to regain any momentum.  A couple of injuries had hit and they were down 2 on the bench, so rotations were limited and this certainly wasn’t helping.

It looked all over but for a strong burst early in the last quarter where the Lions kicked a couple of goals including a sensational effort from Captain Jesse Derrick from near 50 close to the boundary line. That goal put the Lions back to within 6 points and it felt like the tide had turned.  That was until Labrador were able to answer quickly with a goal of their own and then the bubble had burst.  Labrador again seizing control and slipping back out to a 20 point lead which was the final margin.

Despite the conditions the kicking of Dylan Troutman out of the backline was superb and he led the way for the Lions. Tyler Cornish, Jason Burge and Jake Dignan toughed it out in the midfield all day and along with great contributions from Jed Harrison and Simon Callahan, were amongst the better players for the Lions.

Next week is the first home game of the season as the PBC Lions take on the Broadbeach Cats.  Get along to support the boys and the club!!

Whilst we didn’t get the result we were after there were plenty of positive signs to take away from the game.

Ultimately,  it was a 10 minute patch before half time that proved to be costly. We coughed up a 19 point lead and went into the main break trailing by 6 points.

It was a very physical game with neither side willing to take a backward step. Dylan Troutman off the back flank was providing plenty of rebound and we were able to take the ball forward through good spreading. The next link in the chain was where we fell short with our forward 50m entry kicking being well below par. Unfortunately when the ball went to ground we lacked a small at the fall of the ball for crumbing opportunities.

At ¾ time and trailing by 17 points the boys responded well in the last quarter. Tyler Cornish and Jason Burge got their hands on the ball and drove it forward. Jesse Derrick was looking dangerous and we rallied to be 6 points down with plenty of time on the clock. From there though, it was all Labrador and they went on to win by 20 points.

Losing is never a great feeling but as mentioned earlier there were plenty of positives in the game. We know that we are not far off the benchmark team and with some small adjustments and more time together on the field things will improve quickly.

Football moves on quickly though and this week we take on Broadbeach in our first home game of the year. Let’s make sure we get as many supporters there as possible and get back in the winners column.

Another loss today, but some real positives and encouraging signs from our young team. We dominated the game for the first quarter and a half, having the ball in our forward 50 for the majority of this period. We unfortunately just couldn’t capitalise on the scoreboard,  at one stage kicking 1 – 10 whilst the opposition were only 2 goals straight.

We then dropped off and let Labrador kick 6 straight goals in a 10 minute period which undid all of our previous good work.

The challenge at half time was for the boys to guts the game out in the 2nd half in which they did. We stuck to our guns, showed great spirit to go goal for goal and put together some great passages of running footy.

We’ve now played both grand finalists from last year in what has been a tough start to the season. In both games we have had more possession than the opposition but haven’t had the polish and efficiency to get reward for effort but if we keep at it our time will come soon.

Always disappointing to lose but a good effort from the boys.

Playing Labrador at Labrador was always going to be a big challenge.  Adding to this, all the Academy players being called to the Suns to play this week meant all three teams, Seniors – Reserves and Colts would need to dig deep to find players.

Come Thursday night’s match selection, I only had 17 fit colts players; Ben Stubbs adding to the injury list with broken ribs after last week’s game.   Nick Perso and Nelson Henderson played their first match for Palm Beach which offered us some relief, BUT, we still only had 17 players!!  With incredible assistance from Pete Goody and the support from the Junior Club, we managed to get 5 players from the Under 16 side to play up to the Colts.  A massive thank you to Coach Dale Turner for his support.

We knew this was going to be a very tough and physical game, so I asked my players to focus on two factors I believed would be key- GUTS & DETERMINATION.  From the first bounce, right until the last siren the game was played at a high level physical tempo.  Tom Woodman clearly showed his dominance around the ground, out marking, tackling and winning every contest. The only two goals kicked in the first quarter came from Harry Day and Jed Melzer who are both Under 16 players.  Liam O’Brien was unstoppable in the centre and so was Dean Katsiris running off the backline.  The boys kept Labrador scoreless at the end of the first quarter.

Scanlon Bergmann’s defensive game was brilliant, playing in front of his opponent and second efforts at the contest.   Labrador clearly won the quarter kicking their first goal while we could only manage to add 1 point to our score.  The game was heating up with intensity at the contest.

Dean Katsiris kicked the opening goal in the 3rd term before Jeremy Jago went down from a hit behind play.  Labrador was throwing everything at us to win this game.  Harry Day and Mathew Oats showed real determination with 2nd and 3rd efforts in the contest. Unfortunately, Labrador scored the next three goals and by the end of the quarter our lead dropped to only 5 points.

The last quarter saw two teams desperately wanting the win.  Billy McAllister kicking our only goal, while Labrador added two more to their total early in the quarter.  At the start of the game I asked for GUTS & DETERMINATION and that’s what they boys delivered, taking the game by 1 point.

Great start to the season with 2 wins.