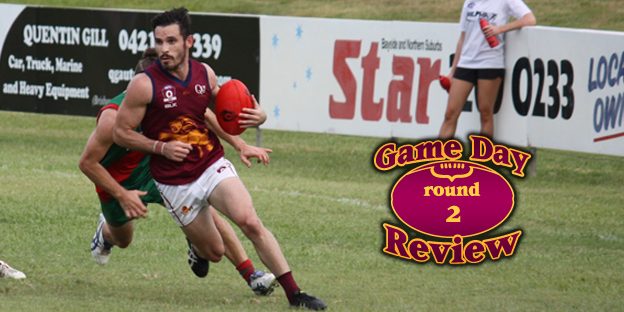 QAFL Round 2 turned out to be a shocker for the Lions. After a tough week in which injuries hit some key players and some uncertainty about playing numbers , we finally made the road trip on Sunday up to Sandgate.

The previous night had seen the Colts losing by 57 points to Southport Sharks at Southport but we were hoping to turn it around in both the senior and reserves games.

Reserves were short on numbers and a late night ring around on Saturday night found a couple of colts who had already played and a couple of old timers from the masters to help out. Despite some reasonable patches of footy, the reserves weren’t able to turn things around and were on the receiving end with a 25 point loss.

The senior side had 8 changes for the week.  Injuries to star midfielder and reigning Best and Fairest winner, Todd Bryant, forward Nathan Carr, Oscar Jones and Sean Penski forced 4 changes.  QLD Under 18 reps Max Spencer and Jesse Joyce were called up for rep duties, whilst Tom Thynne and Kyle Emery were called up for the Gold Coast Suns NEAFL side.

It was a hard fought slog through most of the game.  Skills were down and Sandgate made the most of their opportunities.  We also lost ruckman Will Shone with an ankle injury midway through the game and later an elbow injury to first gamer Joel Gray left us short on rotations too.

Ultimately, we were beaten for most of the game.  There was a good patch of footy through the late part of the third quarter when the Lions piled on 5 goals in ten minutes.  At that stage it looked like we could take the game. But after the last break, the Hawks wanted the win more and they were able to regain the lead and hold on for a 15 point win.

Disappointing is the word that sums up the day. With so much on the line we just didn’t turn up to play. Our skill level was well below our best and in the end it cost us the game. With 8 changes to the side from the previous week it was always going to be a difficult game. Losing 2 more players during the game didn’t help the cause. We simply ran out of legs.

Patches during the 3rd quarter were the best we have displayed all year but that level wasn’t sustained into the last. Our running game during that period of play was what we had trained for over the summer.

This week the assignment is another tough one travelling to Mt. Gravatt who are also on the rebound. I have no doubt that our boys will be stinging from this result and will be doing everything possible to reverse that this weekend.

Disappointing result for the two’s.

Charles Gabbe worked his arse off and Blake Emblem battled hard all day in the ruck.

A big thank you to Nick Cappelleri, Peter Hancock , & Mark Cornish (Spud) from the Masters for filling in and also to Tommy Rueben, Sam Stubbs, & Travers Golding for coming up to Sandgate to play, backing up after their Colt’s game on Saturday night.

Let’s look ahead to Mt Gravatt this weekend. Work hard on the track & have a couple of good wins

This week we came up against last year’s premiers and again had a chance to test our game plan against quality opposition.

Southport proved that they are still a very good team and will go far into this year’s completion.

Simple errors cost us dearly and at times we didn’t stick to the game plan and just got caught up in the relentless pressure that Southport could apply as a well drilled football team.

When we played our style of football and stuck to our game plan we were able to create scoring opportunities.

As the year goes on we have to get better at sticking to our structures at all times and work our way through situations.

Best player for the day again was Nick Holloway, with special mention to Tom Frazer who continually won the ball around the contest, and also a great effort from one of our young guns Hayden Hoskins who battled hard in the ruck.