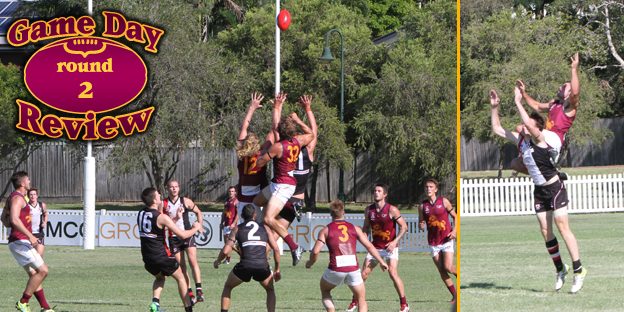 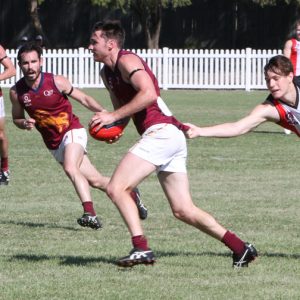 Saturday saw PBC making the journey up to Morningside to take on the Panthers.  A clash with some significance in that it was Captain Jesse Derrick’s 100th club game and also as PBC were seeking a win against a team that they have been winless against since the creation of the new QAFL Competition.

The day got off to a great start with the Colts running away to a big win over the Panthers.

A close and hard fought game followed in the Reserves where we lead through most of the first half but were unable to stay the course losing by 22 points.

So with the ledger squared at one game all and with the tenacity shown in the Reserves game the stage was all set for a big game in the Seniors and it did not disappoint. The crowd was treated to a real Battle Royale!

Once again in quite warm conditions, both sides came out firing and no quarter was given from either side.  There was never more than a few goals in it either way and it was an intense battle all the way.

Morningside got a slight ascendancy in the second quarter when they kicked 4 goals in a row, but the Lions bounced back with 2 just before half time and there was only 10 points the difference at the main break. 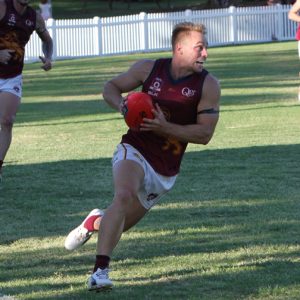 After half time it was just as fierce and both sides were clearly giving everything to the contest.  It was a case of a goal or two one way and then a goal or two the other way but Morningside continued to retain the lead.

A huge effort in the last quarter saw the Lions kick several unanswered goals, taking the lead and changing the momentum of the game as they shot out to a 16 point lead. However, somehow the Panthers were able to steady and the toll of such an effort wore the PBC boys down.

Morningside regained the lead and ran out 12 point winners in an excellent game of QAFL Football.

Although the results of the Seniors and Reserves game didn’t go the Lion’s way, the effort and courage shown was certainly worthy of praise and there was good indicators for greater things to come this season.

The reaction of the PBC players on the final siren says it all. Massive effort but pipped at the post by Morningside. 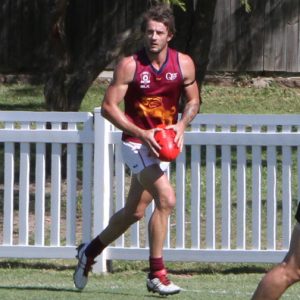 So close yet so far away!

This is a game that got away from us. It had all the hallmarks of a final with ebbs and flows and neither side backed away from the contest but unfortunately in the end they found a way to win the game.

Our boys were brave and battled fiercely despite being down a player from the 10 minute mark of the first quarter.

Danny Darnett did a great role on Nathan Kinch and showed his courage by gritting his teeth and pushing through a lot of pain to be a major contributor.

Jackson Emblem made a solid return and convincingly out pointed Kent Abey, whilst Jake Goody was clever and unselfish up forward.  Jon Croad again showed his importance to the team with plenty of big marks around the ground and kicking 2 goals.

Josh Woolley was at his one on one best, both in defence and as a midfielder and was also able to hit the scoreboard.

It was disappointing to not get the desired result but showed us that with a little more polish with the ball we are a very dangerous side.

It was a disappointing result today after the perfect start.

We kicked the first 4 goals to give us a launching pad that we just didn’t utilise. From this point the opposition kicked 7 of the next 8 goals to go into half time 5 points up. When we lose momentum we have to learn how to dig in and do whatever it takes to wrestle back control.

Our third quarter was full of endeavour but didn’t get reward for effort due to messy forward 50 entries. Morningside then showed us what precision delivery and quick transition from defence can do. They slotted a few late goals to give them a 3 goal break going into the last quarter.

We then controlled the first 15 minutes of the last with the game being played entirely in our forward half but unfortunately we shot ourselves in the foot by being wasteful in front of goals. In that time we had 10 shots at goals, for a poor return of only two goals.  Again we left the door open for Morningside who finished the game out by kicking the last 3 goals.

This was 4 points we threw away!

The endeavour and effort was good from our boys, but for the second week running we were wasteful in our forward zone and we weren’t prepared to be defensively accountable around the middle when  they had possession. Individual errors and poor decision making contributed to the end result.

Ladder leaders Surfers Paradise are next. I’m expecting a fierce response from our boys.

It wasn’t a great start to the day when we lost 5 players before the game.  22 players down to 17 in one text! We already had 5 guys out this week and there were some big holes to fill.

Travers Golding had to fill the ruck role and did a great job winning a lot of ruck contests and pushing us forward.

Best on ground James Elliot was tireless in his efforts and is really impressing us with his selfless approach to his footy. He was everywhere, tackling hard, running hard and playing a smart game.

Lachie Blank continues to impress with not only his run, but his talk and decision making.  New inclusion Aaron Ashby was great up forward, taking some telling marks and kicking some great goals and Marley Hansen was great, working tirelessly for his team.

We were really impressed that even though we had the game won, everyone stuck to the team plan and rules and didn’t take the lead for granted.  It was a great win away from home and all the boys contributed!

We are very young group and we are still learning parts of the game and that’s a real bonus when the core group want to learn. We are improving each session because of that mental factor and we need to train together more to improve.

We need to convert more of our play to goals not points. Our inside 50 stats are good but we are missing too many opportunities. We have a ways to go but we are improving in most areas every session.