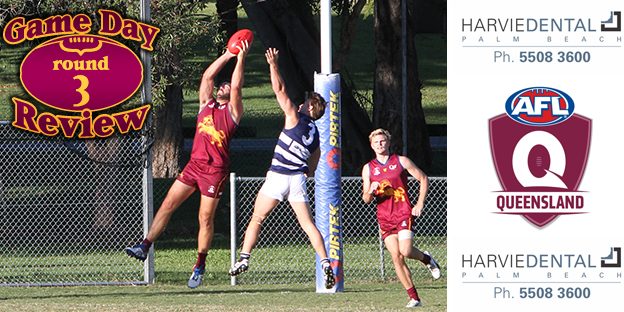 It was the first home game for 2017 on Saturday (the first two games were scheduled as away games due to cricket pitch renovations) and the Lions hosted one of their greatest rivals in fellow Gold Coast club Broadbeach.

With the sun shining and a slight breeze, it was nice day for footy and the game started at a hectic pace.  The play was fairly tight, but the Lions were able to push out to a slender lead at quarter time.  The lead might have have been a slightly larger but for a couple of easy misses in front of goal. 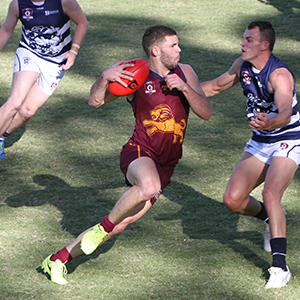 Tyler Cornish, amongst the Lion’s best, braces for impact

The game opened up in the second quarter, with PBC kicking towards the Sports Club end, and the Lions began to dominate the game.  Kicking 5.5 for the term to the Cats 0.2 and opening up a comfortable half time lead.

After the main break the Lions weren’t ready to take the foot off the accelerator just yet.  Continuing where they had left off in the second quarter banging on another 7 goals in the third term to be 70 points up at the third quarter break.

When the Lions scored quickly at the start of the last quarter, thanks to a nice hanger in the goal square from Aspley listed player Guy Dickson,  the game was theirs and the heat went out of the contest pretty quickly. From that point on Broadbeach kept pace with the Lions as they clearly backed off the tempo. But it was a case of too little, too late for the Cats and the final margin ended up 65 points in favour of the home side.

Josh Woolley was fantastic for the Lions, producing his best game of the season so far and winning the QGR Best on Ground Award. The PBC midfield was sensational lead by Tyler Cornish, Jason Burge and Tommy Thynne and a big game from ruckman Tom Arnold.  The Harrison brothers, Zac and Jed, were very busy and along with Angus Munro  were also amongst PBC’s best.  Jarryd Douglas kicking 5 goals and Guy Dickson with 4 goals were also prominant

Next week the Lions have the bye but the following week they will back at home on May 20 to take on Sandgate.

You can view video of the match thanks to AFLQ here 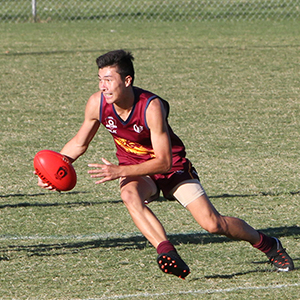 Jake Burrows shows his pace on senior debut for PBC

After a loss the previous week its always interesting to see how the team will respond. On Saturday the players responded like a good team does, with emphatic victory.

The game was red hot early and whilst we were over using the ball going forward, we still held a slight advantage at quarter time. Josh Woolley was off to a flying start and our backline, although undersized, held strong.

In the 2nd quarter the game opened right up with us slamming on 5 goals to none. The midfield with Tyler Cornish,  Tom Thynne and Jason Burge working overtime and Zac Harrison running hard on the outside we were able outwork the opposition and hurt them on the scoreboard. The forward line functioned better this week and shared the workload with multiple goal kickers. 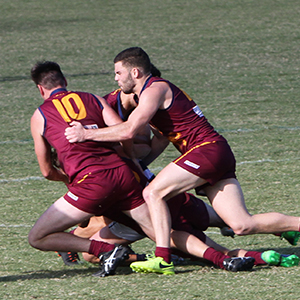 After the main break again the boys asserted their dominance on the game and blowing the margin at ¾ time to a very comfortable advantage. The backline were well on top and provided great link running and defended hard. The mids were everywhere and provided plenty of opportunities for the forwards to convert.

Overall it was a very pleasing team effort with a great spread of contributors. We know have the week off and a chance to freshen up and hit the ground running with another home game against Sandgate.

That promises to be a great day with family activities planned. It would be great to see all our supporters there.

Back at home and we chalked up our first win for the year, a great reward for the effort that the boys have shown so far.

We were off the pace in the first quarter , displaying a lack of confidence and trust in each other but to the teams credit,  they settled themselves down at the break to turn things around in the second term. Our mids worked tirelessly,  raising our intensity at the stoppages and in the tackles which stopped Broadbeach’s run. The backs marshalled by Blake Schneidner and Brayden Pearson took control and Jack McNevin down forward gave us a clear winner . Great effort at the main break to have our noses in front.

We kept our work-rate up in the third term and then showed the ruthlessness that we pride ourselves on to kick six goals in the last for a well deserved 52 point win.

We are now set up nicely going into the break. The boys continue to show encouraging signs each week so we now have four sessions on the track to have us roaring and ready for Sandgate in a fortnights time.

It was a great start to the season with two 1 point victories.  Unfortunately though, we experienced our first loss on Saturday and our injuries list keeps growing.  Ioan Jones was added to long term injury list with a broken leg from the Labrador games last week and  Jeremey Jago came into the game with a back problem.  On a positive note, Jeht Wollington was cleared from what originally looked like a season ending knee injury and we welcomed back Ben Stubbs from a heavy knock to his ribs in the round 1 contest.

Our boys started the game well with our tackle count up.  Matthew Oats led the pressure at the ball around the ground.  Arron Ashby and Tyson Schuener provided great drive into the forward line.  Ben Stubbs and Billy McAllister scored our two 1st quarter goals, giving us a 8-point lead going into the first break.

Liam O’Brien opened the scoring in the second quarter with a major, followed by Billy McAllister’s kicking his second for the day.  With the inclusion of Lachlan Blackmore, playing his first game for the season from a knee surgery, we added 3 goals for the quarter.  Ryan Suddes provided great options up forward, while Dean Katsiris was giving us drive out of the backline.  Hayden Hoskins battled hard down back, while Tom Woodman started to show dominance on the wing.

Broadbeach came out after the half time break to claim control of the third quarter.  Our only goal came from Lachlan Blackmore.  The intensity of the game was starting to take its toll on our players.  Jackson Andrews came off after a heavy head clash, that kept him off for the rest of the game.  A big shout out to our trainer James who quickly attended Jackson and reported on his condition promptly to me.  Going into the third quarter break, scores where level.

Unfortunately, due to Dylan Troutman not passing his fitness test for the Seniors, Dean Katsiris needed to finish playing for us early in the last quarter to fill in numbers for the Reserves.  So we lost Dean, Jeremy Jago’s back was re-injured, Jordan Burns suffered a corked quadriceps and Jackson Andrews was out with concussion, so we couldn’t match the run of Broadbeach, who scored 5 goals in the last quarter.  Lachlan Blackmore, again, scored our only goal for the quarter and Broadbeach ran away with a deserving win of 71 – 45.