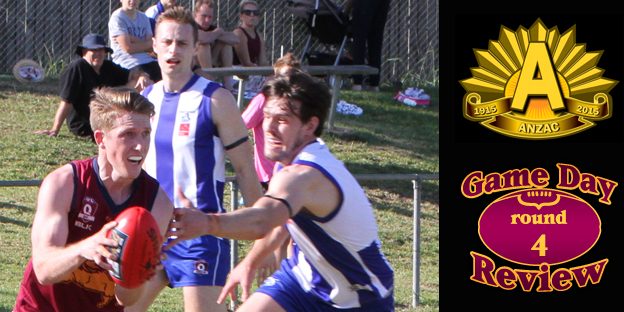 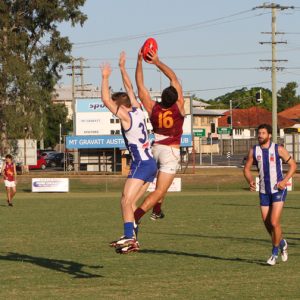 Footy on ANZAC day is special and a great tradition that we have embraced in honour of the ANZAC heritage. The clubs and players are extremely proud to celebrate and commemorate the men and women that serve and protect our great country, both past and present.

For the second year running PBC travelled to Dittmer Park to face Mt.Gravatt in a highly anticipated ANZAC day clash.  All sides looked to be in for a decent stoush as Mt. Gravatt have proved more than competitive across all grades so far in the season.

In the Seniors, with the Vultures undefeated after three rounds and the Lions looking to consolidate a strong start to the season, it was a week that promised a lot and those in attendance were treated to a very good game of football.

It was a close game all the way, PBC took the lead at the first break by just 2 points in a low scoring opening quarter. Mt.Gravatt wrestled the lead back but only by 3 points at the half. 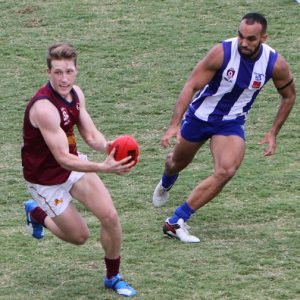 The third quarter saw 3 goals apiece and the Vultures holding only a 2 point lead into the last quarter.  It was anyone’s game at that stage and you would be hard pressed to pick a winner.

Coach Chad Owens must have had some inspirational words at the break though because somehow the Lions found another gear in the last quarter.  A number of unanswered goals saw the Lions jump out to the biggest lead of the match and from there they were able to hold on for a gutsy 20 point win.

In the curtain raiser, the reserves match was one out of the box. Although the Lions had plenty of the play they were just unable to convert their work into goals.  In contrast, the Vultures played solid footy and they raced away to a 51 point lead at half time.  The Lions had failed to score a goal in the first half!! 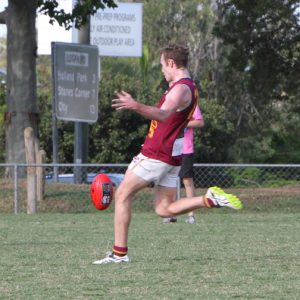 About halfway through the third quarter the game looked well and truly over. Neither side had scored for a while with PBC still 50 points down and without a goal. Then from somewhere, a goal, then another, and another.  All of a sudden there was momentum and belief. Three more goals before the end of the quarter and the Lions were right back in the game.

A nail biting last quarter ensued as both teams found hard for the win.  The Lions amazing comeback was complete when just a minute before the siren, Luke Marshall sent a long bomb through from the 50.  A one point win and story to tell about one of the greatest comebacks in the history of the club!

The Colts game was a bit disappointing for the Lions.  Expectations were high for a good showing against the competition leaders Mt Gravatt. However, the home side controlled the early part of the game and took a commanding lead which the PBC boys weren’t able to peg back. The Colts now sit 8th on the ladder in the 20 team competition. 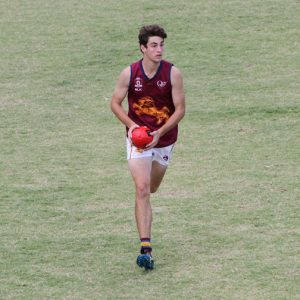 PBC’s Dale Neuhaus runs the ball out of defence

On what is the most the special of weekends on the Australian calendar it was an honour to get the chance to play our great game.

The game was played in great spirits from both clubs with plenty of ebbs and flows. We had prepared for an arm wrestle and that was how it played out. Neither team could take advantage of the small breaks they earnt.

Jackson Emblem was the most influential player on the ground and controlled it from full back. Matt Derrick shut out a very dangerous opponent and the two of them provided plenty of opportunities for our running game to take over.

It was a very fast paced game which provided plenty of great passages for the spectators but also included many mistakes that will need to be rectified. Daniel Grant and Nathan Robertson were very solid in the middle. Stephen Thynne worked hard all game. 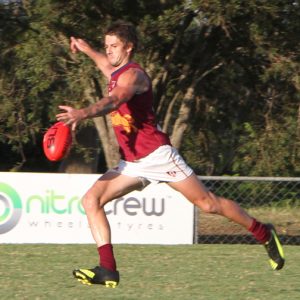 Up forward, whilst Jarryd Douglas didn’t kick many goals, it was is marking around the ground and his pressure that enabled us to keep the ball in our forward half. Jed Harrison continued his form from last week and Sam Stubbs is proving to be a difficult match up for the opposition.

Aside from getting the four points on the day, the most pleasing aspect was that we had players who were down on the day but managed to find a way late to influence the game and ensure we got the win.

We now head into the break with a 3-1 record and set ourselves up for a very big game with Western Magpies next Saturday. Let’s keep working hard on the track and enjoy every challenge that lies in front of us.

Another trek to Brisbane looking to grab a valuable 4 point and we couldn’t have got off to a worse start.

Mt Gravatt fed off our constant inability to hit forward 50 targets and punished us on each turnover with their transitions. Their first 4 goals originated from deep near our goal mouth and they finished with six for the term with us goalless.

The second term saw us controlling the play but again we broke down with our skill execution, decision making and poor ball retention when in attack. Despite having double the forward 50 entries, we could only manage 5 points to their 3 goals.  So at half time we were goalless to their 9 goals.

Despite being 9 majors down we could sense there was genuine belief within the group. We just needed to convert and put a bit of heat back on the opposition.

By nearly the halfway mark of the 3rd quarter we were still goalless but at least had dried up their scoring. Hammo (Nick Hamilton) then slotted our first, a beauty from a tough angle at the 14 min mark and you could feel the tide was turning. Big Sword (Matt Snelling) gave us a target in the goal square, our midfielders and backs were running hard and we finally started delivering in deep with direct, quick and accurate movement of the pill. We piled on 6 goals in 10 minutes to be only 12 points down at the last change.

They kicked a goal early in the last term (their only goal in the second half ) but we kept chipping away, playing on at all costs and with great resilience got our noses in front with 90 seconds to play courtesy of a perfectly taken long set shot by Marsh (Luke Marshall).

In a mad scramble in the remaining minute, we managed to hang on to win by a point in what could only be described as one of the most courageous and amazing comebacks by any PBC side that has taken to the field. The 22 lads that donned the maroon jumper showed enormous character and belief in each other and also learnt a great lesson in that you are never ever out of the contest.  Brilliant effort boys!!

It was a great challenge for our colts against Mt Gravatt on Saturday and we got taught a bit of a lesson on preparation .

We fought hard after the 1st quarter but we weren’t fit enough to keep up with them.

We now know what we have to improve on!

There are a lot of processes and principles that go into a good football team and contribute to having a great season and we need to improve on all of them! 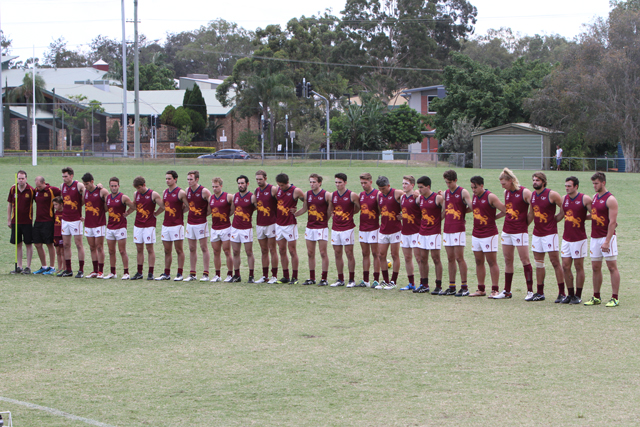