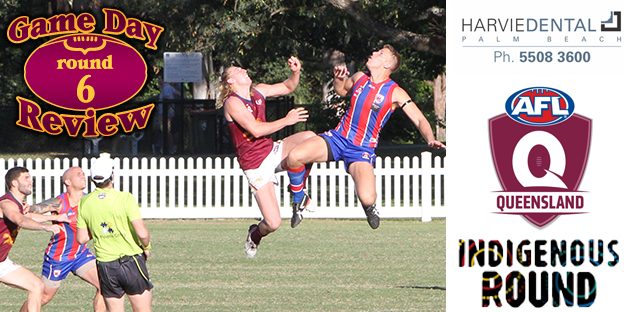 Wins in all three grades for the first time this season, with two nail biters in the Colts and Reserves, winning by 4 and 3 points respectively, before the Seniors went about a comprehensive win in the main game.

Once again there were several changes to the team this week and some very handy inclusions at that. Brock Askey returned to the team for the first time this year following a preseason injury, Josh Woolley, Dylan Troutman and Brad McDonald were back along with Southport Listed players Jonathon Croad and Mitch Johnston.

From the first bounce the Lions looked in control of the game, and despite a distinct size difference in the midfield, the in form Lions midfielders were too quick and slick for the Gorillas.  Tyler Cornish in particular was dominant in the midfield with 38 touches and a goal, along with Jesse Derrick and Jason Burge. The difference in the game was clearly the Lions speed of ball movement and clean skills and they never looked under any real threat as they strolled out to a 68 point win.

Mitch Johnston was very dangerous up forward and finished with 5 goals and a potential Mark of the Year nomination.  He was well supported by Antony Sercombe, who continued to impress for the Lions with 4 goals.

Lachlan Ritchie also continued his great form this season along with Jed Harrison.

The Lions look forward to another away clash this week, though this time it’s fellow Gold Coast club and long term rival Surfer’s Paradise. 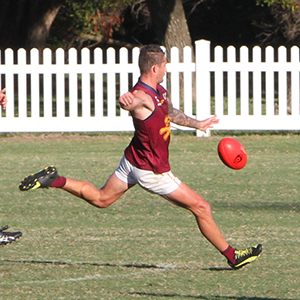 The Lions’ Josh Woolley get his kick away

This was our most pleasing win of the season. Pleasing for the fact that our pressure and team contribution was the best it had been all year. It has set a standard that we need to keep striving for every week now.

Putting the opposition under pressure and then out working them on the outside was the focus for the game and it was done really well for 90% of the game. Lead superbly by the skipper Jesse Derrick, the midfield worked tirelessly to get back in numbers and run the ball out. Jed Harrison down back played a pivotal role and allowed plenty of offensive rebound from there through Dylan Troutman, Josh Woolley and co.

The forwards again rewarded the teams work up the ground and converted well to keep the gap extending at every break. Lachlan Ritchie continued his good season with an outstanding performance of work rate and pressure. Mitch Johnson chimed in with 5 majors and Antony Sercombe 4.

Brock Askey made a super return to the senior team with relentless tackling while big man Jonathon Croad returned from Southport and gave us more presence and height around the ground. Tyler Cornish, Jason Burge and Simon Callaghan repeatedly ran away with the ball against much bigger opponents.

It was a great win but soured somewhat by injury to Angus Munro who had returned to top form.

It was also the first time this season where all 3 grades won on the same day. That makes it a great day for the club.

This week we take on old rival Surfers Paradise at their ground and a game that provides another challenge before the bye. 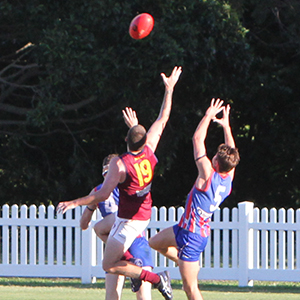 A tremendously courageous effort saw our reserves team get the win against the second placed Wilston Grange.  Down in size against a tall and physically strong opponent,  we slugged the game out right to the end to get a valuable and well deserved four points.

We got jumped early to be down by 20 points but showed great composure and resolve to have our noses in front at half time.  The second half we again ground away in a high pressured struggle.

We stopped bombing the ball long and showed better  composure when going forward,  whilst keeping our pressure and defensive acts up around the contests. Credit to the team for their  ability to shut down Wilston Grange’s defensive spread and back half exits,  which hurt us early. This was achieved through the communication and organisation efforts on field. Great leadership by all players which was most pleasing.

Again, a brilliant effort by the boys, very proud of all who wore the jumper today. And great for the club to get three wins for the first time this season. Well done Palmy!

With the AFL playing the Indigenous Round, Wilston Grange took the opportunity to hold a ceremony of their own before the game. They invited our indigenous player, Ben Stubbs, to participate with two of their own players, in opening the game with a “Welcome to Land” ceremony. Thank you to Wilston Grange for honouring the original owners of our great land.

Travelling to Brisbane for an early game start is never desirable, but we can’t complain when we consider Aaron Ashby to had to leave home at 5:30am. A 6-hour round trip didn’t deter him nor his team spirit. Also, a mention to Patrick Jago and Logan Schlanger from the under 16’s team for playing up, the Colts thank you.

We had an unexpected last-minute pull out as Matthew Oats unfortunately woke up that morning with a fever and obviously couldn’t play. This set back, had us take the field with only 19 players.

The ground was dewy to begin with, but the weather conditions were definitely on our side. The forecast was blue clear skies and no rain to hinder our set plays, however, we only managed to score one goal through Jeht Wollington. It was a tough battle though with the opposition only managing to do the same. Jimmy Cahill displayed great leadership qualities and was the driving force from the backline.

Second Quarter saw Wilston Grange more determined than us at every contest. This enviable mindset, kept us scoreless for twenty minutes while they added 3 goals 5 behinds to their total, giving them a 23 point lead at half time.

The Third Quarter was a turning point for us. The boys improved the on-field morale by encouraging and talking to each other. This one crucial element that has been lacking from our previous four match day games. The boys witnessed firsthand the positive impact that has on their skills and determination which translated their efforts into winning points. Keep it up boys!

Riley Mayne kicked three goals which reduced Wilston Grange’s lead heading into the last quarter. Dean Katsiris and Jeht Wollington demonstrated leadership by fearlessly putting their bodies on the line for the benefit of our team.

Last quarter saw Billy McAllister open the scoring with a goal followed by Riley Mayne, raising his tally to 5 for the day. Tyson Scheuner and Aaron Ashby lead the way in the
middle of the ground, and Nick Perso was solid contributor down back which saw us run out
the game as 4 point victors.

We proved to ourselves that we can come back from a 23 point deficit at half time with only
19 players and still take the four points at the end of the day. Great effort boys! 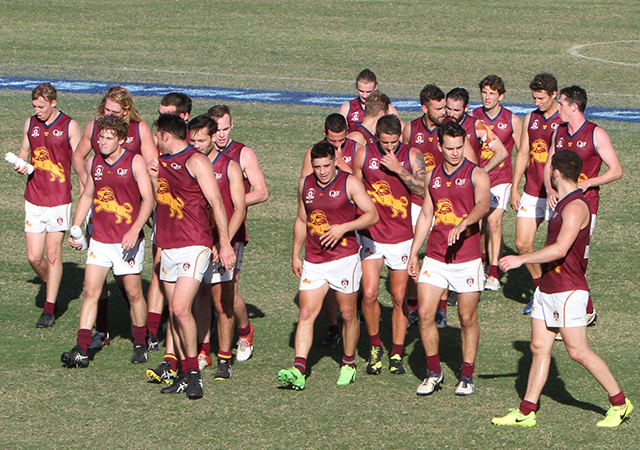