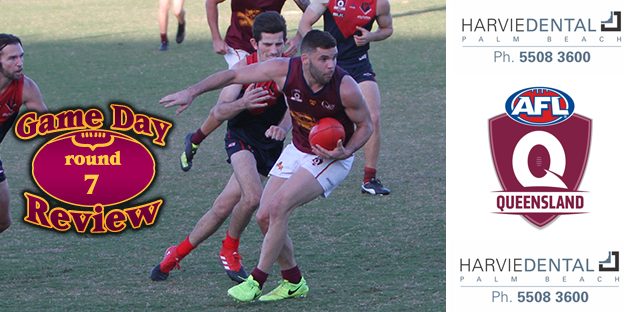 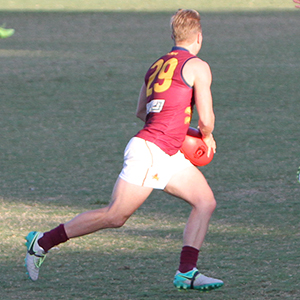 Jason Burge stood up when the Lions needed a boost

The Lions should have been on notice heading up to Surfer’s Paradise.  Their last few ventures there have ended in losses and they were tested also there in the preseason this year winning by a solitary point on the siren. The Demons young team loves to run and apply pressure and that has troubled the Lions before.

Taking complete control early, it looked like the Lions had been paying attention to their recent history at Sir Bruce Small Park.  Kicking with the aid of the breeze and in quick order the Lions had scored the first 6 goals on the game and looked to have everything going their way.  However, they failed to maintain the pressure to the first siren and the Demons snuck in with 2 goals that were well and truly against the flow of play.

Having regained some momentum and with the aid of the breeze in the second quarter the Demons got themselves right back into the game, whilst the Lions struggled against the breeze. However, the Lions still held the lead by 14 points heading in at half time.

The third quarter saw the Lions back with the aid of the breeze but they had inexplicably lost the avenue to goal, scoring just two behinds for the quarter whilst Surfers kicked 1 goal 3 behinds .  The last break had the Lions still with a narrow 7 point lead, but the Demons seemed to have the momentum. 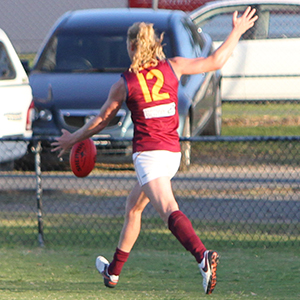 Jonathon Croad goals to regain the lead for PBC

An arm wrestle ensued in the last quarter and the low scoring trend of the third quarter continued.  When the Demons goaled around 10 mins into the quarter they hit the lead for the first time and if you were a betting man, you would have wanted to be on them at that stage.  A tense period ensued where neither side could really take control of the game but as the quarter wore on the Lions somehow managed to get the ball long to ruckman Jonathon Croad who marked and goaled to regain the lead with 10 minutes to go.

From there the Lions lifted with Jason Burge in particular digging deep to get back control.  Another foray forward to Croad again resulted in a goal and the Lions were back in charge.  Two more goals in quick 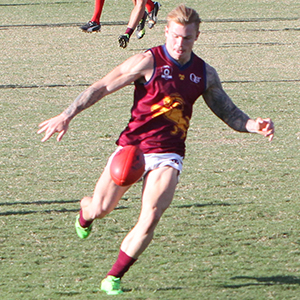 fashion to Mitch Johnston and the game was over with PBC running out 18 point winners.

It was clear in rooms afterwards that the Lions knew they had dodged a bullet, but the pleasing aspect of the win was being able to get the 4 points despite playing well below expectations. Heading into the bye week in second spot on the ladder with 5 wins and 1 loss sets the Lions up for a good push towards finals but there is plenty of hard footy coming up.

The Reserves and Colts both scored big percentage boosting wins in their respective games.

Next game is Round 8 (17th June) at home against the Western Magpies and the 2007 Premiership Reunion will be a feature of the day!

Too close for comfort was how I’d describe the game from the weekend. After getting off to the dream start we dropped our guard for 5 minutes and momentum went to Surfers and we struggled to get it back. Our intensity around the contest dropped off and we overused the ball far too often and it proved costly.

It became a dour struggle and Surfers played the conditions really well and choked us up. For 2 and a 1/2 quarters we lacked our usual run and spread and couldn’t hit the scoreboard. In the last quarter we lost the lead, from here it could have gone badly.

Jason Burge, Jon Croad, Jesse Derrick and Josh Woolley stepped up and ensured that this one did not slip away. That’s what we were hoping to add to this years group was that leadership in these situations. In the end it was a good late response and a sign of a good team that when the chips are down the players can still find a way to win.

Another good performance from the boys which has now given us four wins in a row.  First quarter was a bit flat, we weren’t as direct as we should’ve been, were a bit slow with our movement and we overused our handball too often. Good effort into the wind though in the second quarter to correct our movement and our foot skills which resulted in a 5 goal to nil effort.

The second half saw a continuation of the second term. We played at a better tempo and had far better ball retention to see us win by over 100 points for the second time in three games.

Our defence again was a highlight,  only allowing 3 goals to be kicked against us. Also great to have 3 tall forward targets in Tom Frazer,  Riley Mayne and Jayden Verdoorn who presented and came at the ball carrier all game. They kicked 10 goals between them, a terrific result for the team.

The boys continue to show encouraging improvement each week and now get to enjoy a well deserved break. Great four week block, well done to all.

First up, I want to welcome our newest members to our team- Patrick Jago and Logan Schlager.  They were both playing in the under 16 squad, but are now officially COLTS.  Their addition raised our team count to 22 players which alleviates pressure from the rest of our boys.

At Monday night’s training, Hewy, the clubs running coach, put our boys through some intensive workout drills.  The benefits were instantly visible at Saturdays game against Surfers.

We started the day with a pre-match meeting where I outlined the statistical differences between us and our competitor, Surfers.  We established that although we were currently placed 5th on the ladder and Surfers last, on paper, there was nothing between us.  Our points tally of 31 goals and 40 behinds (226) and their 29 goals and 55 behinds (229) meant that it could be anybody’s game.  We had three very close wins, where they had three very close losses.  The boys translated these facts into drive and were motivation to kick 7 goals, unanswered in the first quarter.  Riley Engels got us on the board in the first two minutes of the game.  Aaron Ashby and Tyson Schuener were a driving force out of the centre.

In the second quarter, although we were going against a strong wind gust, we not only managed to keep Surfers goalless, but we added to the score board with an additional 6 goals.  Jeremy Jago returned to play up forward from playing defence for the past three weeks.  By half time, he had kicked four goals.  Our back line was led by Dean Katsiris and Jimmy Cahill.  Their determination to drive the ball forward saw both guys have a shot for goal in the first half, where Dean Katsiris was successful.  Jimmy Cahill, at Centre Half Back, was in unfamiliar territory but had a go and scored a point.  Great job Jimmy for running hard and for your strong defensive work that allowed you the opportunity to have a shot for goal.

In the second half of the game, our focus was hitting the front and centre of contested marks.  Ryan Suddes and Liam O’Brien stepped up and showed great skills and were rewarded with one goal each.  Jarod Neuhaus worked well with Lachlan Blackmore and Nick Perso rotating through the ruck position all day.  Jeht Wollington put his body on the line on more than one occasion to win the hard-contested football.  Billy McAllister played up the ground and gave us many opportunities to capitalize and kick goals due to his determination to drive the ball forward.

Jackson Andrews, Matthew Oats and Jordan Burns provided support and encouraged the backline throughout the whole day which impacted the entire team !