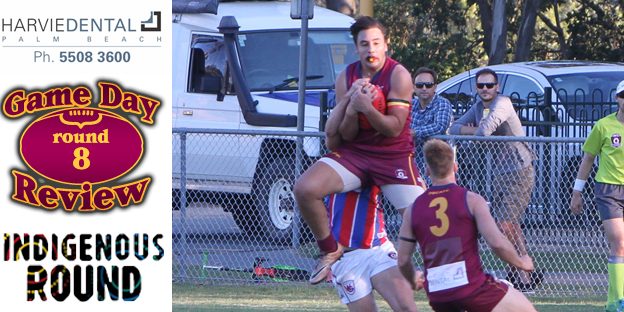 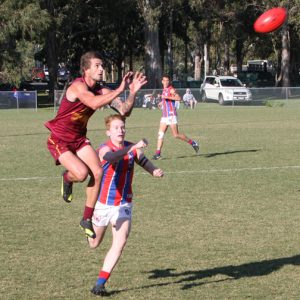 With the competition bye, to accommodate the QAFL Representative game, coming up and with the Lions sitting a game clear on top of the ladder the focus this week would be maintaining the momentum that has been built up over the opening rounds and carrying that through to the bye.

It was Indigenous Round, Ladies Day and it was all happening at Salk Oval!

The seniors started slowly with Wilston Grange controlling the play early and handling the blustery conditions better. Later in the quarter opportunities presented but PBC failed to capitalise and went into the first break 14 points down despite having 1 more score attempt than the Gorillas. 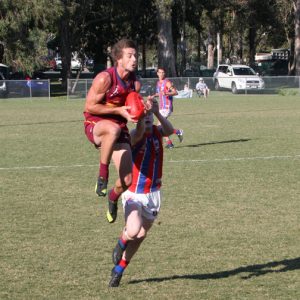 After quarter time however, the tempo picked up for the Lions and whilst there were still numerous missed opportunities they also banged on 8 goals for the quarter against the Gorilla’s 3 to take a 24 point lead into halftime.

From there the Lions controlled the second half and never really looked under too much pressure.  More inaccuracy, which would have frustrated coach Chad Owens as the margin could have been much greater, but a comfortable victory in the end winning by 27 points.

The Colts have finally but a W on the board after some close games that they were on the wrong end of the scoreboard.  The improvement is there for all to see and they were convincing winners over Wilston Grange by 122 points.  A very handy percentage keeps the finals hope alive for the Colts.

The club has several players in line for selection to the QAFL Representative Side which will take on the Western Australian Amateur Football League this Friday night (3rd June) at Yeronga.  Congrats to Jesse Derrick, Jackson Emblem, Jon Croad and Jarryd Douglas on selection in the squad and best wishes for final selection and the game! Represent PBC and the QAFL with pride! 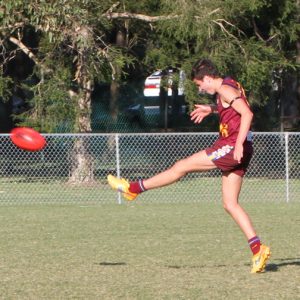 Wasteful is the best way to describe the game from the weekend. In a game where we generated 40 scoring shots we were not able to see the benefits of that on the scoreboard. We had the majority of the ball but didn’t put our opportunities away. Our back 6 again were very organised and turned defence into attack on numerous occasions. It was forward of centre that we let ourselves down and chose the wrong option multiple times.

Our second quarter was the best of the year and we managed to turn a deficit into a handy 4 goal lead. Again we controlled the game but this time we kicked 8 goals and rewarded the hard work being done. 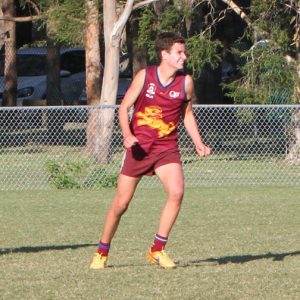 The joy of kicking your first senior goal!

The third quarter again saw our backs and mids right on top but we couldn’t convert those opportunities and kill off the Wilston Grange challenge. Our ball movement was also a little shaky and put us under some pressure with regular turnovers. At three quarter time although controlling game we only held a 14 point advantage.

In the end we were able to come away with a 27 point victory. The win had many highlights including the debut of young Damien Ashby. He provided plenty of hard running and used the ball very well and finished with 2 goals. Jackson Emblem continued his outstanding season down back. Flinn Chisholm is building every week and continues to impress with his inside pressure and skills on the outside. Zac Callinan’s smarts and skills on the wing were again pivotal.

This week the boys get a well-deserved break and set their sites on reigning premier Labrador after the bye. Congrats and best wishes to the boys taking part in the rep game. It will be great to see our loyal supporters down at Salk Oval on 11th June when we take on last years premiers Labrador in a massive game for the club.

Back at home against a tricky opponent whose form this year has been up and down. We got away early, displaying

good energy and zip at the contest.  A couple of early goals then saw a succession of missed shots which should’ve put a big gap between us and our opponents.

Wilston Grange then wrestled back momentum late in the quarter by kicking 3  goals.  They then kicked an early one at the start of the second due to our sloppy errors . That was to be their last and only major for the term as our back line tightened up.

Whilst they were spreading the footy well deep in their back half, we were compact and organised to ensure they weren’t hurting us in our back half of the ground. However we kept letting ourselves down with poor release kicks out of defence when potential transitions were on. Despite taking in a hard earned 8 point lead at the break, there was a sense of flatness amongst the troops which was addressed.

Our reply after half time was good however we couldn’t hit the scoreboard due to poor conversion and a lack of forward line cohesion. The forward 50 entries were lopsided in our favour, but with only an 18 point lead at the last change,  the game was still in the balance.

To Wilston Grange’s credit,  they threw everything at us in the first 10 minutes but couldn’t break our defensive set ups. We then controllled the last 15 minutes which showed great maturity and poise from our boys, this facet  pleasing the coaching staff greatly. Not so pleasing was our continued inability to convert and waste scoring opportunities. One goal from seven scoring shots not a great result.

On the flip side we only conceded six goals,  so another great defensive effort.  Jacob Ogden at centre half back is really stepping up now, Oscar Jones and Sean Brookes perform for the team in whatever position they are playing, Nick Hamilton worked tirelessly as always and Sam Davidson in his first game of the season gave us great run and carry as well as drive out of the middle.

We were definitely not on top of our game all day and made a lot of errors that we invest a lot of our time into. However that’s footy,  no team is cherry ripe every week.  To close the game out comfortably was a credit to the boys and a great lesson. We will work hard at rectifying  the problem areas from this game and make sure we are up for a massive next match against Labrador.  Great last 4 week block from the ressies, well done all and enjoy the break!

Great to get a win this week! Even better to hear the boys sing the song!

We played some good team orientated footy today and everyone played their role.

Jack McNevin was again impressive with his work ethic and clearances and was best on ground . Reece Gallagher had a good day providing a big target up forward, taking some strong marks and getting a nice bag of 6 goals. He has been great for us since his return.

Taylor Hombsch was calculated with his run and disposal and willingness to bring other players into the game. Mitch Olarenshaw again was really good, his courageous efforts at the ball and for his team are very impressive to watch.

Lachy Blackmore was great in the ruck, feeding our onballers with some precision tap work and using his body well.  Jayden Taylor is getting better each week and worked tirelessly. His fitness and run are really an asset to our team .

Overall it was fantastic to get the points, play some quality footy and more importantly see the boys wanting to improve and take on the challenges. Our communication was a lot better today and if it gets better every training session and game we will quickly tidy up some areas in our game that have been a bit lacking.

Every week is a test of our dedication to improve mentally and physically and Labrador next week will be a great test of that!

Be happy to have the win but we will park it and move on, focusing on our next challenge.

We still have a number of things we need to get better at and improving week to week is our focus.